Oh. My. Days. The only three words, which come to mind after seeing Gen and the Degenerates bring the house down on the other side of the Pennines. This band is a force to be reckoned with and don’t they want you to know it. Tonight, myself and Olenka (our brand new Yorkshire -based writer!), went to check them out at Bad Apples in Leeds.

Bad Apples is a venue I’ve never been to previously; a little rock bar tucked away in Leeds centre, complete with a shrine to Lemmy and a built in, lit up coffin in the floorboards – need I go on? Though the room isn’t huge, the energy certainly is, with every inch of the space filled with an entrancing rock ‘n’ roll attitude delivered by Gen and her degenerates. The sound has a bluesy rock feel, and by the end of the set, clothes are off and all speakers have been climbed – I’m exhausted and I’ve barely moved. This is a band that is destined to fill festival tents and bring the party to many future summers to come. To top off the night, Gen gave us a love letter as we left – the sweetest gig leaving present EVER and one I’ll treasure forever. Fact. 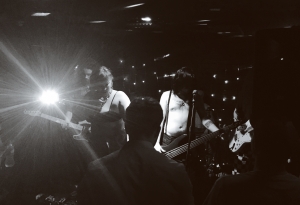 Have a listen to their latest release, ‘Don’t Leave the Party Early’, and catch them on the rest of their tour while you can – rest assured you won’t leave disappointed.